On March 3rd, people celebrate Hinamatsuri (Doll Festival) all over the country.  It celebrates the growth of the family’s girls. March 3rd is also called girls’ day.

If a family has one or more little girls, they set up a special step-altar at home on which to arrange their Emperor and Empress dolls, called "Hina" in Japanese. Hina dolls are dressed in beautiful Heian-era costumes. Parents hope that their daughter will become as graceful as the Heian nobility.

It is a custom that Hina dolls are set up early February and put away soon after March 3. It is said that if Hina dolls continued to be displayed long after March 3, the daughter would not find a husband soon. 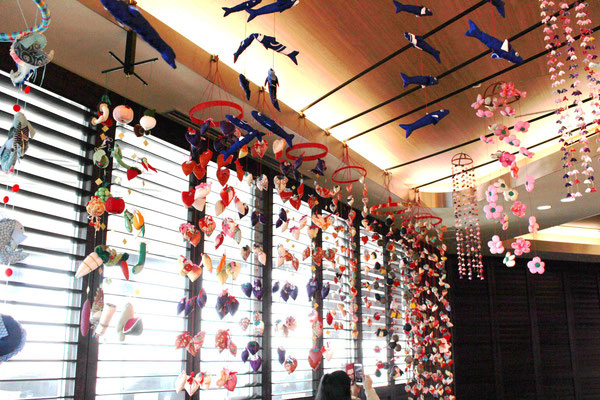 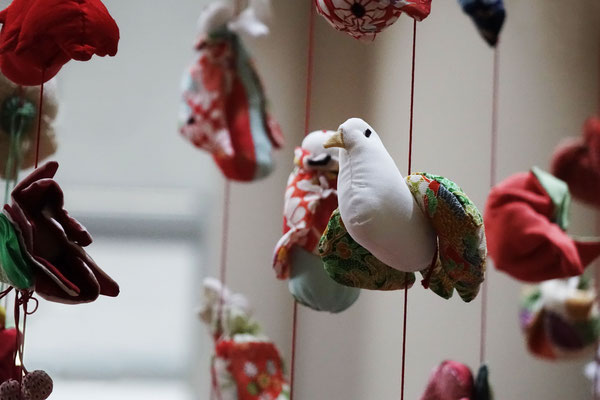 A set of hina dolls is normally gorgeous and costs very high. Tsurushibina is relatively cheap because ornaments are made by using old kimono cloth. Hanging them by code, it does not require the space for the arrangement and child can play by touching. There are a variety of ornaments such as fruits, vegetables, fish, and cute animals depending upon districts.

Tsurushibina is said to be originated in Izu Inatori town of Shizuoka prefecture in Edo era, a few hundred years ago. A peach shaped ornament is one of the major and important ornaments used in Inatori. At this time of a year, peach blossom bloom and tells coming of spring. Legend has it that peaches have mysterious power which destroy evil spirits and prolong life.

It is said that the origin of Hinamatusuri is cased on a custom from 3rd century China. People believed maliciousness has an easier time coming during the changing of the seasons. This was an imperial ceremony to keep away these bad things.

The ceremony changed into the girls’ festival during Edo era (1603-1868) when Japan was peaceful and people enjoyed their life. Hinamatsuri was made one of five special seasonal events:

Originally boys and girls celebrated Hinamatsuri. After May 5 started to be called boys’ festival in 1948, Hinamatsuri became known as the girls’ festival.

Nowadays, at kinder gardens they celebrate Hinamatsuri by singing a song of Hinamatsuri, and eating special sushi called chirashizushi. Supermarkets sell special confectionaries and chirashizushi. However, March 3 is not a national holiday.

I hope this helps you to understand one of Japanese traditional customs.